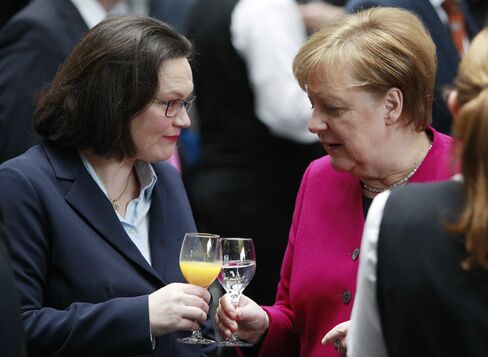 Angela Merkel has enjoyed a relatively painless start to her fourth term in office. That could be about to change with the German leader’s Social Democrat coalition partners poised to elect a combative one-time party rebel as their leader. Andrea Nahles, who made her mark as a rabble-rousing opponent of former SPD Chancellor Gerhard Schroeder’s labor reforms, is slated to become the first woman to lead the party -- formed as a workers’ movement in the second half of the 19th century -- at a meeting on Sunday in Wiesbaden. Seeking to revive the party’s fortunes after a bludgeoning in last year’s election and a tortuous , process, of forming a new coalition with Merkel, Nahles has promised to be an uncomfortable ally. Should she succeed, the plain-spoken 47-year-old could aim even higher if, as expected, Merkel exits the political scene by the 2021 general election. “She will use the next four years to lay out her program for the post-Merkel era,” Jacob Funk Kirkegaard, senior fellow at the Peterson Institute for International Economics in Washington, said in an interview. Nahles may be the next SPD chancellor candidate “if she doesn’t make any major mistakes.”, For Merkel, grappling with European reforms and shifting global alliances, that means her governing partner is shaping up to be less docile than in previous “grand” coalitions. Nahles demonstrated the SPD’s assertiveness on Tuesday, warning against the , hard line being taken, by Merkel and her bloc on euro reform. “I have to wonder why so many red lines have been drawn by our coalition partner that I can’t accept,” Nahles, who leads the SPD’s parliamentary group, told reporters. Her priority will be to rebuild support after the party suffered its worst electoral loss in Germany’s post-World War II history in September. She takes the reins from Martin Schulz, who led the SPD to defeat, only to be pushed into coalition talks with Merkel. He , resigned the leadership, in February following a party revolt over his failed bid to become foreign minister. Finance Minister Olaf Scholz has been serving as interim chairman. Ralf Stegner, an SPD vice president and an influential figure on the party’s left, drew a comparison between Nahles and Merkel’s own rise to power. After taking over the Christian Democratic Union in 2000, Merkel led the party’s parliamentary group for five years before replacing Schroeder as chancellor. “Nahles is certainly more vocal than Merkel,” Stegner said in an interview. “But they do have something in common.”, Nahles will also occupy the twin roles of parliamentary leader and party chairwoman. Even though the SPD is in the coalition, Nahles is building a “power center” outside the government, according to SPD whip Carsten Schneider. She didn’t take a cabinet post under Merkel, giving her more freedom to take on the Merkel-led initiatives she opposes. “We expect that Nahles will go beyond the constraints of the coalition agreement” to sharpen the party’s profile, SPD lawmaker Lothar Binding said in an interview. The chancellor has developed a respect for Nahles as a politician who works professionally behind the scenes and stands by her political pledges. As labor minister in Merkel’s previous government, she led a seamless implementation of the minimum wage, a top SPD campaign promise in 2013. But there are clear contrasts with Merkel, a physicist by training raised in East Germany. Nahles, who has a degree in German literature, grew up in the West Germany of the 1970s and 1980s with a firm attachment to the country’s leftist politics. She led the SPD’s youth wing at the end of the 1990s, before spearheading the opposition to Schroeder’s welfare cuts and deregulation of the labor market. Nahles’s lingering rebelliousness was on display after last year’s election, when the SPD initially vowed to go into opposition. She resigned her cabinet post to take over the party caucus -- and admitted to feeling wistful in her last cabinet meeting with Merkel, only to add: “Tomorrow they’ll get it in the teeth.”, But the collapse of Merkel’s attempt to form a government with the Greens and the Free Democrats in November forced the SPD to reconsider, with Nahles leading the way. Her impassioned speech at a , party conference in Bonn, in January is credited with sealing a vote to enter coalition talks -- and notably outshone Schulz’s more stumbling delivery. Nahles has long shed her outsider role -- and an already restive base has taken some issue with her appointment to the top position, a result, they say, of backroom deal-making. She’ll be challenged for the leadership by Simone Lange, 41, the SPD mayor of Flensburg on the Danish border. But most expect Nahles to win by a sizable margin. “Nahles will be supported by a good majority at the party convention,” Schneider predicted.