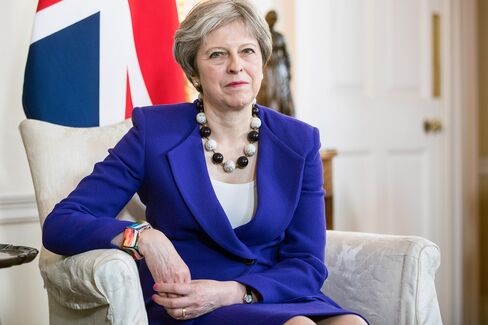 Theresa May is battling to avert a cabinet revolt amid fears from euroskeptic Tories that she’ll break her promise to take the U.K. out of the European Union’s trade regime. May’s inner circle thinks she could be forced to accept staying in the EU’s customs union because , Parliament will reject, her plan to withdraw from it when the issue comes to a vote in the House of Commons, according to one official. Such a move , could trigger, a challenge to May’s leadership from Brexit campaigners in the Conservative Party. “We need to take back control of trade -- that means leaving the protectionist Customs Union,” Environment Secretary Michael Gove, a key Brexit supporter in May’s cabinet, said Sunday on Twitter. May’s team insists she’s committed to breaking away from European customs laws. “We are leaving the customs union and we will be free to strike our own trade deals around the world,” May’s spokesman James Slack told reporters in London on Monday. The issue is likely to come to a head at a key meeting of May’s senior ministers on Wednesday. The question of whether to leave the customs union goes to the heart of the kind of Brexit the U.K. will get. While staying in risks a political crisis at home, it could also unblock difficult , negotiations, in Brussels. Read more: May’s Brexit Red Line on Customs Union Could Be Next to Go, May has said she wants to leave the trade regime, which sets tariffs for all EU member states, so that the U.K. can strike better deals with countries such as the U.S. and Australia. Such agreements can’t be reached while the U.K. is covered by EU bilateral accords. But business leaders argue that leaving the customs union will severely damage cross-border trade, potentially result in new tariffs, and require burdensome checks on the origin of goods in transit. European officials also see staying in the arrangement as a potential solution to the otherwise intractable issue of how to avoid a , hard border, between the U.K. and Ireland after Brexit. Senior euroskeptic ministers are likely to make their case for breaking free of the EU rules directly to the prime minister on Wednesday, when she holds a key meeting of her inner Cabinet focused on the Brexit negotiations, one official said. The main topic will be a discussion of the U.K.’s aims for international trade after Brexit, according to the official, and will almost certainly involve consideration of the customs deal the country will seek to reach with the bloc. Last week, Foreign Secretary Boris Johnson warned that failing to leave the union would be worse than no Brexit at all. His euroskeptic cabinet colleague, Liam Fox, the international trade secretary, is also a , passionate advocate, for leaving EU common tariffs and commercial policies. “Trying to keep us in a customs union would be deeply divisive in the party, the Commons and the country at large,” Jacob Rees-Mogg, chairman of the European Research Group of Euroskeptic Conservatives, told the Sunday Telegraph. The battle over customs rules is likely to reach a climax in a Commons vote as early as next month. The issue will be aired in a non-binding parliamentary debate later this week. The Sunday Times quoted one government aide saying May wouldn’t be upset if Parliament forced her to stay in the customs framework by voting against her plans to leave it, though one person familiar with the prime minister’s thinking disputed the account. The newspaper reported that May’s office believed Fox and Johnson would quit rather than accept staying in the EU customs arrangement, but that other euroskeptics such as Gove would remain. Another senior British official said May’s cabinet hasn’t yet discussed what kind of customs plan it wants, but needed to reach a decision before a key EU summit in June. The Times reported in Monday’s edition that May favors a close partnership deal in which the U.K. conducts the EU’s customs checks on the bloc’s behalf, but that some of her ministers believe this won’t work. “The route we’re going for is leaving the customs union but ensuring that we don’t put in place unnecessary barriers to our trade with the European Union,” Justice Secretary David Gauke said on the BBC’s “Andrew Marr Show” on Sunday. “We can make that case to Parliament, we can win that case.”