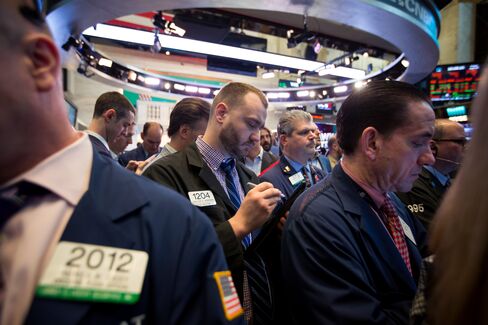 Bond traders agonizing over the flattening U.S. yield curve got a bit of a break last week. But with a flood of Treasury supply about to hit the market, they’ll have little time to catch their breath. The U.S. will issue a combined $96 billion of two-, five- and seven-year notes this week, the largest slate of fixed-rate coupon sales since 2014, according to BMO Capital Markets. After a stretch dominated by Federal Reserve speakers, the offerings are likely to refocus traders on the prospect of ever-larger auctions to cover swelling budget gaps. That outlook will be hammered home next week, when the Treasury releases its latest financing estimates for the current and upcoming quarters. With trillion-dollar deficits just around the corner, the department’s forecasts could very well be market-moving. “This week is basically just a dress rehearsal to what is bound to be one of the more interesting Treasury refunding meetings we’ve had in recent years,” said Gennadiy Goldberg, senior U.S. rates strategist at TD Securities. “There’s a lot of supply coming, which is probably the understatement of the century.”, The elevated issuance may renew flattening pressure on the yield curve. Spreads between Treasury maturities narrowed last week to the lowest in more than a decade, and then saw , a rare bout of steepening, as the week drew to a close. With Fed speakers leading traders to firm up expectations for more rate hikes, two-year yields reached about 2.46 percent Friday, the highest since September 2008. (Recall that for , much of last year, , 10-year yields struggled to climb above 2.4 percent.), “We fully anticipate that the front-end of the curve will remain under pressure on the combination of supply and monetary policy -- this week being an important test of the former,” BMO strategists Ian Lyngen and Aaron Kohli wrote Friday in a note. Longer-term interest rates are getting interesting again, too. The benchmark 10-year yield rose to just above 2.96 percent Friday, breaching the previous four-year high of 2.9537 percent set in February. That puts the widely watched 3 percent level , back in focus, . Then again, as traders learned earlier this year, U.S. equities don’t like higher interest rates very much. The S&P 500 fell the past two sessions as 10-year yields climbed, raising the specter of another , tug-of-war, between the assets that could slow the ascent in yields. A move above 3 percent “wouldn’t surprise me,” said John Briggs, head of strategy, Americas, at NatWest Markets. “Then I see 3.05 percent as the really big level. So a lot of yield resistance here.”, There isn’t as much of a struggle when it comes to shorter maturities. Two-year yields have risen in all but two of 16 weeks this year. Five-year yields just logged their biggest two-week climb since September. The bond-market selloff is bound to lure buyers at this week’s auctions. But with $96 billion on offer, any flattening reprieve may prove ephemeral. — With assistance by Alex Harris